Episode 9 – “The Anatomy Lesson”
First aired July 26, 2019.
This episode shares its title with The Saga of Swamp Thing #21 (Feb. 1984).  In that issue, Swamp Thing undergoes a vivisection at the hands of Jason Woodrue and learns his true identity.

EPISODE 9, SCENE 1: Jason returns home, waking Caroline, and she describes a nightmare that she had.  In her dream, she is searching outside for Jason but cannot find him, and then she notices a man lying on the ground. Jason tells her that when she is free of Alzheimer’s disease, her nightmares should stop too.  Caroline continues, explaining that the man on the ground in her dream was a monster. Meanwhile, the frozen Swamp Thing arrives at the Sunderland facility.

EPISODE 9, SCENE 2: Abby finds Liz at the Roadhouse and tells her that Swamp Thing is missing.  Abby believes that someone has captured Swampy and the events that she witnessed at the CDC lead her to believe that a powerful organisation is responsible.  Abby thinks that Woodrue may be involved and might know where Swampy is. Liz recalls that Abby has always defended her since they were friends in high school, and agrees to help her.

EPISODE 9, SCENE 3: Avery arrives at the new lab where Swamp Thing is being secured to a table.  Jason soon enters the room and explains that the green lights in the room are designed to inhibit plant growth and weaken Swamp Thing if he awakens.  Jason asks to be left alone while he thaws out Swamp Thing and performs an initial assessment.

EPISODE 9, SCENE 4: In hospital, Cassidy sees the Phantom Stranger.  The Stranger shows him a vision of Abby and Liz in an industrial building being pursued by military personnel.  The women are found and are killed when they surrender. Stranger explains that this is one possible future, and that only Cassidy can alter the outcome.

EPISODE 9, SCENE 5: Liz and Abby arrive at the Woodrues’ house and asks Caroline where Jason is.  She invites them in but is clearly confused. Abby notices Caroline’s medication and is concerned for her.  Liz and Abby also notice muddy footprints in the house and find photos of the new Sunderland facility. Liz and Abby leave and Abby explains that Caroline has Alzheimer’s.

EPISODE 9, SCENE 7: Back at the hospital, Liz shows Abby the photo she stole from the Woodrues’, which is annotated with details of the new lab.  Liz searches an online database to find Sunderland’s properties and they notice that Maria has recently filed for sole ownership of them all.  They find a property that visually matches the photo they found and decide to go there.

EPISODE 9, SCENE 8: Swamp Thing claims that he is feeling the incisions that Jason is making, but Jason says that his body has no nerves or pain receptors.   Jason finds and removes Swampy’s internal organs, which are made out of plants and are functionally useless. Swamp Thing struggles to understand what this means.  Woodrue explains that Alec wasn’t transformed by the disease. He says that, after the explosion, Alec’s body mixed with mutagenic plant matter and the plants absorbed his consciousness.  He concludes that Swamp Thing is not a man, but a plant who thinks he’s a man.
NOTES: The essence of this dialogue, and some direct lines, are taken from The Saga of Swamp Thing #21 (Feb. 1984).  However, in that issue, Swamp Thing is frozen and unconscious during the procedure and only learns of Woodrue’s findings later when he reads the report.

EPISODE 9, SCENE 9: Cassidy asks the Stranger if he is meant to prevent that outcome for Abby and Liz.  The Stranger gives him the mask from the Blue Devil costume and explains that the Blue Devil is more than just a character from a movie.  The Stranger lets Cassidy out of his restraints. Cassidy wants to leave town but he knows he must save Liz and Abby. He picks up the mask and it glows.  Cassidy’s skin begins burning again and glowing blue, and then horns sprout out of his head.

EPISODE 9, SCENE 10: Maria is outside, somewhere in Marais. She fails to get through to Ellery on the phone but leaves a message for him, explaining that he is now working with her rather than Avery.  To Maria’s surprise, Avery appears. He introduces her to a psychiatrist Dr. Dennis Barclay, who wants her to follow him, but she refuses. Barclay announces that he has a court order to perform a psychiatric assessment on her after the recent events involving Susie and Abby.  Maria struggles as she is placed in a padded van and Avery feigns concern.
NOTES: Dennis Barclay is first introduced in The Saga of Swamp Thing #5 (Sept. 1982) as a doctor in an unethical Sunderland medical clinic.  He later becomes friends with Swamp Thing and begins a relationship with Liz Tremayne, during which time he psychologically abuses her.

EPISODE 9, SCENE 11: At the Roadhouse, Delroy says hello to Matt, who is upset and drinking.  Delroy noticed that he and Lucilia were fighting earlier.

EPISODE 9, SCENE 12: Abby and Liz arrive at the mobile medical facility.  Liz is familiar with the abandoned site and knows a way in.  They sneak around the facility looking for Swamp Thing and are guided towards his location by some plants.  As in Cassidy’s vision, they are pursued by military personnel. This time, however, Abby shuts off the power to the facility before they are discovered. Woodrue is able to continue his vivisection of Swamp Thing through use of a backup generator.  The soldiers close in on the women’s location, but a blue fireball hits one of the men and burns him. The Blue Devil attacks the other men, using an energy force that is emitted from his mouth and eyes.

EPISODE 9, SCENE 13: Someone from the facility enters and tells Woodrue to leave immediately, and that Swamp Thing will be relocated.

EPISODE 9, SCENE 14: Abby and Liz emerge from their hiding place and briefly see the Blue Devil before he leaves.  They continue to follow the plants, which lead them to Alec. Abby and Liz break his restraints and he instructs them to turn off the green lights, which allows him to regenerate.  Swampy explains that Jason and Avery did this to him and he must go to Skeeter Cove to see if what Woodrue told him was true. As the trio walk past the dead soldiers, a naked Cassidy regains consciousness nearby and realises the destruction he has caused.

EPISODE 9, SCENE 15: Abby continues to follow Swamp Thing, while Liz leaves to investigate why the military and the Blue Devil were at the facility.

EPISODE 9, SCENE 16: Matt is drinking whilst driving and he crashes his police car.
NOTES: Matt Cable has a similar car crash in The Saga of Swamp Thing #26 (July 1984), which results in his possession by Anton Arcane and, eventually, his death.

EPISODE 9, SCENE 17: Jason returns home, excited about his findings.  He finds Caroline in her room and learns that she has accidentally taken all of her medication at once.  He apologises for leaving her alone as she collapses in convulsions.

EPISODE 9, SCENE 18: Avery visits Maria in a padded cell.  He explains that he called in a favour from a judge in order to get her locked up. Maria thinks that Ellery will help her but Avery doubts this.  Avery has figured out that Maria was working with Lucilia, and Maria admits that she organised the hit on him because he was a liar and unfaithful.

EPISODE 9, SCENE 19: Swamp Thing enters the water at Skeeter Cove and emerges holding the corpse of Alec Holland.  He explains to Abby that Alec is dead.
NOTES: Swamp Thing finds Alec Holland’s corpse in the swamp in The Saga of Swamp Thing #28 (Sept. 1984) and gives him a proper burial. 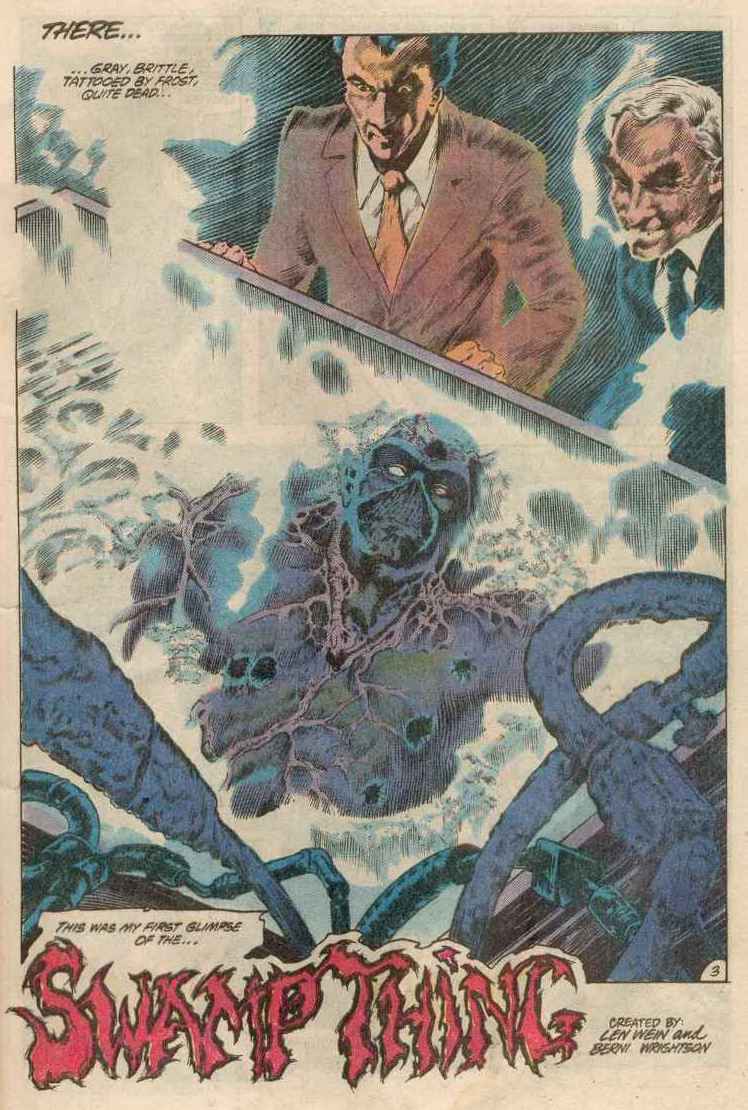 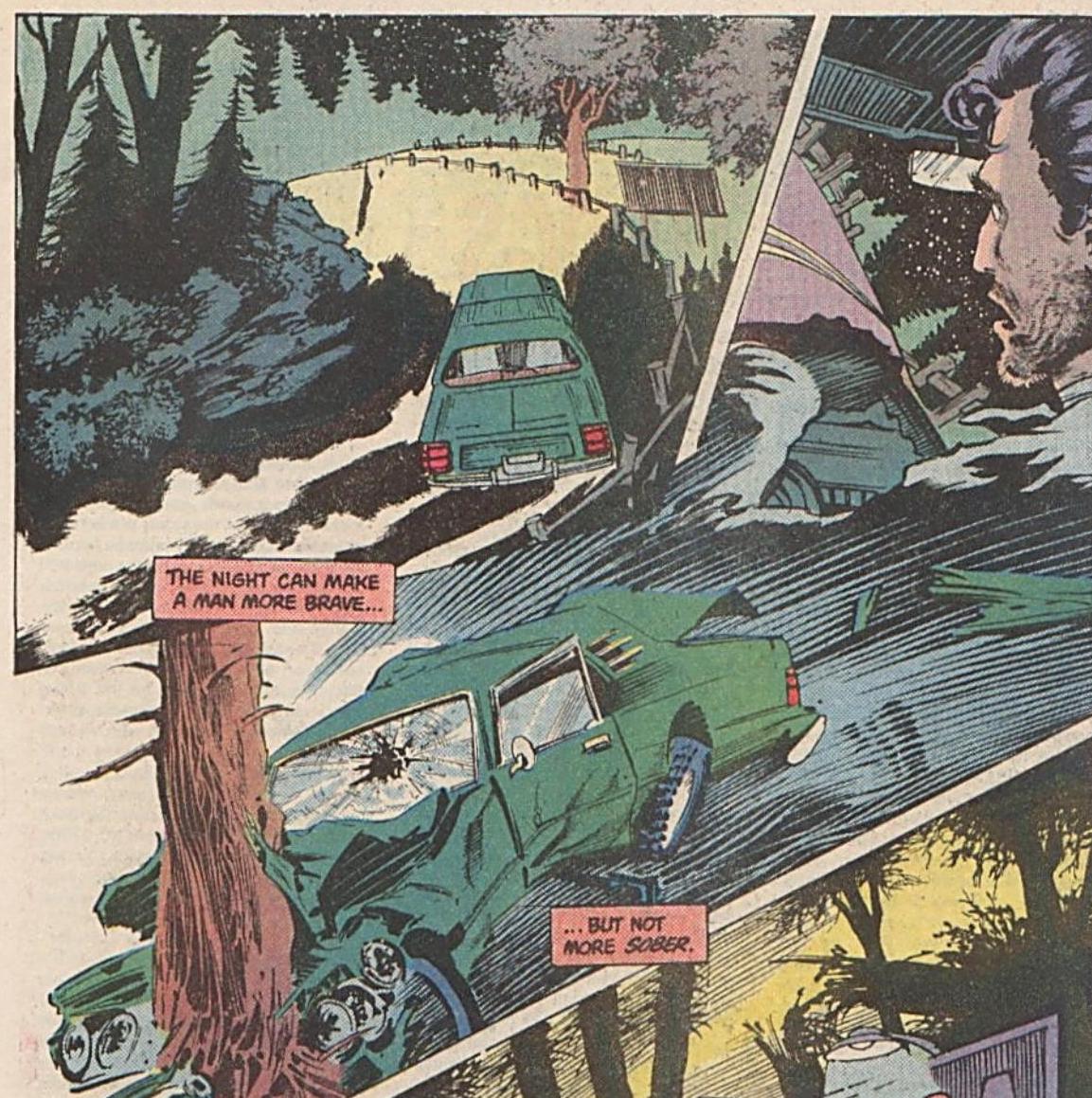 A drunk Matt Cable crashes his car in The Saga of Swamp Thing #26. 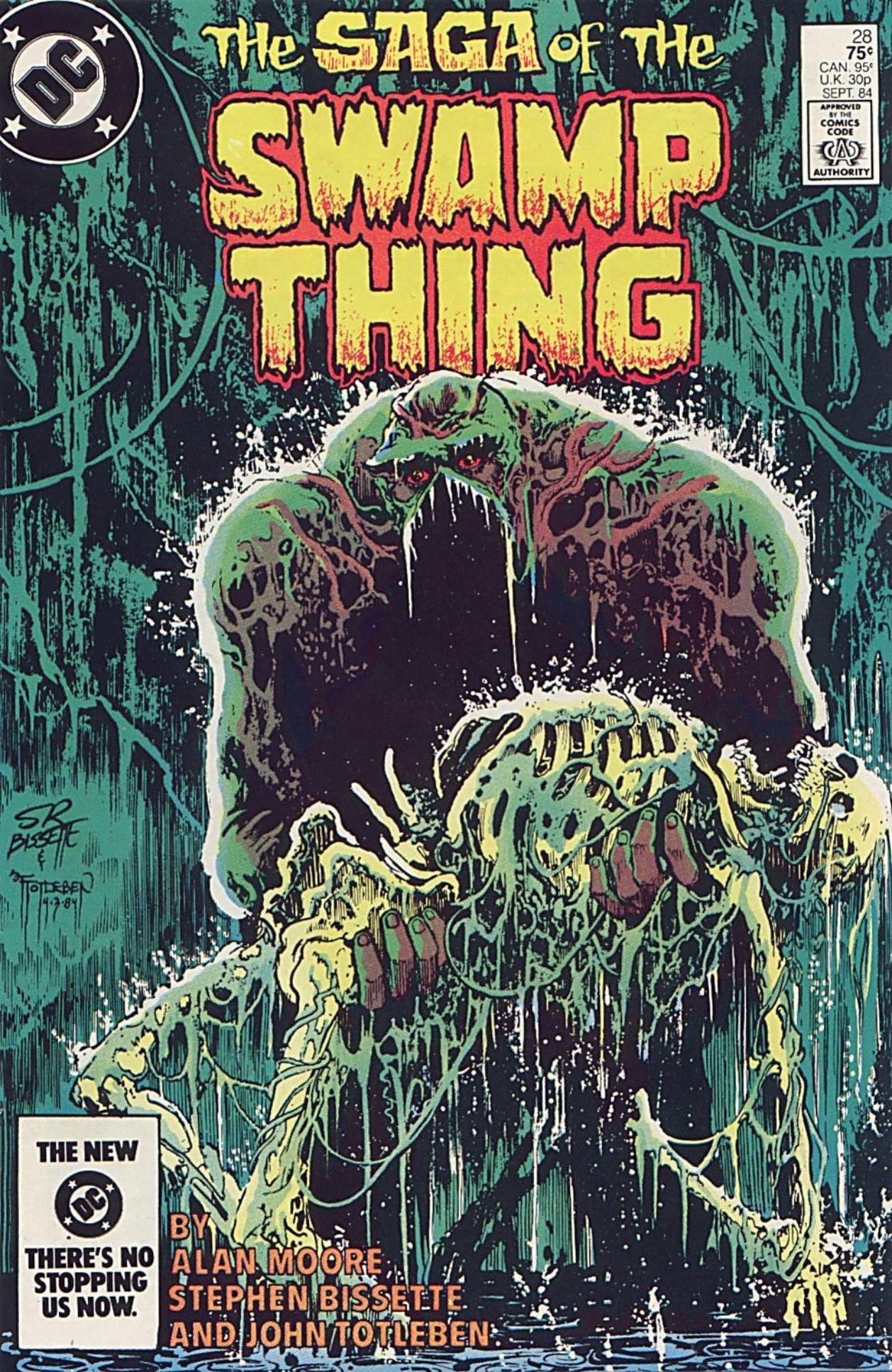 Swamp Thing gives Alec a proper burial in The Saga of Swamp Thing #28.