Here are some further Swamp Thing appearances that don’t really fit into continuity (and so would have gotten lost amongst the annotated Comics webpages), but aren’t really analytical enough to be in the Bibliography.  For the moment, this list is made up of Swamp Thing-related entries in reference material published by or about DC/Vertigo.

Who’s Who : The Definitive Directory Of The DC Universe
Initially authored by Len Wein & Marv Wolfman. DC Comics, March 1985 – April 1987
A 26 volume monthly series that functioned as an encyclopedia of DC Comics characters.  Each entry includes an image (a combination of original and existing art), some personal data, a character history, and information about their powers.
Vol. 01 – Includes Arcane (and marks the first mention of his given name ‘Anton’).
Vol. 17 – Includes Patchwork Man.
Vol. 22 – Includes Swamp Thing. Has data about both Olsen and Holland Swamp Things, and says the former came into existence in 1905, a date never mentioned in the original House Of Secrets story.

Who’s Who : Update ’87
Edited by Robert Greenberger. August – December 1987
An additional 5 volumes were released with more characters and revisions of existing entries, primarily due to reboots caused by the Crisis on Infinite Earths.
Vol. 03 –  Includes John Constantine who, at this point, did not have his own series.

Who’s Who In The DC Universe
Various authors, edited by Dick Giordano. DC Comics, August 1990 – February 1992
The next series of Who’s Who ran for 16 volumes, and each character entry included a full page of original art alongside the usual biographical information.
Vol. 10 – Includes Patchwork Man.
Vol. 15 – Includes Abby Arcane, Anton Arcane, Les Perdu, Parliament of Trees, Swamp Thing, Tefé Holland.  Also includes John Constantine, who by now was more aligned to his Hellblazer title, but his entry includes an image of Swampy.  Also includes Matthew the Raven, whose entry has images and information about Matt Cable.

The DC Comics Encyclopedia : The Definitive Guide To The Characters Of The DC Universe
Written by Scott Beatty & 3 others. DK Publishing, 2004.
The encyclopedia provides an alphabetic listing of characters, with much of the same information and images from the Who’s Who series.  There are various references to Swamp Thing throughout, but the most related entries are those for Anton Arcane, Patchwork Man, and Swamp Thing.  An ‘Updated and Expanded’ edition was released in 2008 (DK Publishing, with the updated text by Dan Wallace) but the Swamp Thing-related entries were not revised.

The Vertigo Encyclopedia
Written by Alex Irvine. DK Publishing, 2008.
An alphabetic listing of Vertigo titles.  The Swamp Thing entry (pp. 166-173) contains: publication information for all the series so far (including the trade paperbacks) and a list of authors and artists involved ; a summary of the plot for the first four series ; a biography of key characters and description of key settings ; some details on related publications ; and illustrations of several key plot points in the series.  There are additional entries for The Children’s Crusade (pp. 46-47), a crossover that involved Tefé, and some details about the Lady Constantine Hellblazer special, which features an 18th century Swamp Thing.
Additional Note: In 1993, soon after the Vertigo imprint began, a ‘Vertigo Encyclopaedia’ was published – a promotional one-shot comic of about 20 pages that I believe was bound into an issue of Previews.  This included an image of Swamp Thing, a description of the character, and some information promoting forthcoming issues.  It is very different in purpose and scope from the similarly titled Encyclopedia from 2008.

75 Years of DC Comics : The Art of Modern Mythmaking
Written by Paul Levitz. Taschen, 2010.
A reference book of art and photos covering the history of DC Comics and its publications. Swamp Thing is mentioned a few times throughout the book and he features in a brief section (pp. 480-483), mostly in relation to the first series. There is some interior and cover art, a cover sketch by Carmine Infantino and Joe Orlando, and the original black and white painted cover of House of Secrets #92

The DC Comics Encyclopedia : The Definitive Guide To The Characters Of The DC Universe
Written by Alan Cowsill & 5 others. DK Publishing, 2016.
A completely revised version of the Encyclopedia that refers primarily to the ‘New 52’ continuity but includes some information from earlier series.  The main Swampy-related entries include those for Anton Arcane (p. 18), Justice League Dark (p. 162), The Parliament of Trees, Patchwork Man (both p. 228), The Seeder (p. 263), and Swamp Thing (p. 291). There is also a ‘Roll Call’ section at the end of the book with additional short biographies of Capucine, Lady Weeds, and Sethe.

Anatomy Of A Metahuman
Written by S.D. Perry and Matthew K. Manning. Insight Editions, 2018.
A collection of Bruce Wayne’s notes about various metahuman heroes and villains. There is a section about Swamp Thing, which provides some details of his origin and his connection to the Green.  Bruce contemplates Swampy’s physiology and how his powers work, and questions Swampy’s relationship to his former self, Alec Holland. Finally, Bruce considers how he might be successful in a battle against Swamp Thing.

The DC Book: A Vast and Vibrant Multiverse Simply Explained
Written by Stephen Wiacek. DK Publishing, 2021.
There are 2 pages devoted to Swamp Thing and the book explains the concept of the Green and describes past avatars. The history of Swamp Thing detailed here incorporates events from all series of Swamp Thing, including the ‘New 52’ and the emergence of Levi Kamei. 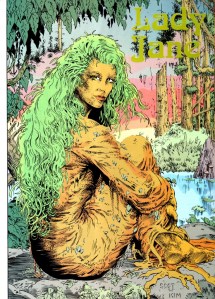 Lady Jane by Eaton & DeMulder from the Who’s Who Update 1993.

Swamp Thing was only mentioned briefly in Book Two of History of the DC Universe (Wolfman & Perez, 1986), but received his own plate in the limited edition portfolio of the same name.