EPISODE 3, SCENE 1: Swamp Thing dreams that he is again Alec Holland and meets Munson in the swamp.  Alec is apologetic for causing his death, but Munson attacks him and threatens revenge.  Swamp Thing awakens and finds Munson’s destroyed body. As he walks away, swarms of insects cover the body parts and a hand twitches.
NOTES: In the comics, insects are often associated with Abby’s uncle Anton Arcane.  In The Saga of Swamp Thing #17 (Oct. 1983) he commands a flying craft that looks like a giant fly, and at the end of that issue he appears with the lower body of a spider and the eye of a fly.  In #27 (Aug. 1984) he appears entirely as a fly. During the ‘New 52’ series, Anton commands the power of The Rot, which infects humans through exposure to insects.

EPISODE 3, SCENE 2: At Liz’s house, Abby and Liz talk.  Abby describes the creature she saw and believes Susie was drawn to Swamp Thing to help him, and also mentions that the creature’s name is Alec.  Abby gets a call to go to the hospital.

EPISODE 3, SCENE 3: At the hospital, Dr. Eli Troost and a new team from the CDC have arrived and are trying out a new treatment, but Abby disagrees with Eli’s approach.  Abby also learns that Jason Woodrue has been employed by Avery Sunderland and is currently re-examining Eddie Coyle’s corpse.

EPISODE 3, SCENE 4: Jason is conducting an autopsy in the hospital morgue when Abby approaches him.  Jason explains that Coyle’s body has been invaded by a plant, and exhibits a scientific coldness towards the human victims of the disease.

EPISODE 3, SCENE 5: Liz talks to Gordon Haas from Marais Savings & Loan, who has been making loans to Avery off-the-books.  Liz puts pressure on Gordon to reveal compromising information about Avery.

EPISODE 3, SCENE 6: At the police station, Matt and Lucilia talk.  Matt explains the details of Vern’s murder. Lucilia is angry that he didn’t wait for police backup and suspects that he was trying to impress Abby.  Lucilia says that they will probably treat Alec’s death as accidental.

EPISODE 3, SCENE 8: Abby finds Harlan, who is sick with the infection and collapses in a seizure.  Plants are removed from his airway and he is taken to the emergency ward.

EPISODE 3, SCENE 9: Abby meets Liz and tells her that she is going to Alec’s lab.  After Abby leaves on a boat, Liz asks Margaux to look for debris from Alec’s boat when she is next at Skeeter Cove.

EPISODE 3, SCENE 10: A hunter in the swamp investigates the screams of a wild pig and finds it dead and covered with insects.  He is attacked by the walking corpse of Munson. Insects fly out of Munson’s mouth and into the mouth of the hunter.
NOTES: In the ‘New 52’ series of Swamp Thing, Swampy battles the Rot (the elemental force of death and decay) through the first 18 issues.   The infection of the Rot is spread by insects in a similar manner and this is first depicted in Swamp Thing #1 (Nov. 2011).

EPISODE 3, SCENE 11: Jason consults with Caroline about his findings.  Caroline expresses some confusion on account of her developing Alzheimer’s disease, and Jason refuses to accept there is no cure for her condition.

EPISODE 3, SCENE 12: In the main Sunderland house, Avery and Maria talk.  Avery thinks that Maria will feel better once Abby leaves.  They are interrupted by Gordon who is afraid of going to prison and refuses to provide Avery with any more secret loans.  He tells Avery to pay back his loans within 24 hours or Avery will be exposed.

EPISODE 3, SCENE 13: Abby arrives at Alec’s lab.  As she looks at his research notes, swarms of insects begin entering the lab..

EPISODE 3, SCENE 14: Lucilia talks to Avery at his house and asks if anyone had motives to harm Alec.  Avery expresses his concerns about Maria’s mental state. Lucilia and Avery have had some sort of prior romantic relationship and they almost kiss but are interrupted and Lucilia leaves when she learns that Maria is still in the house. Maria watches Lucilia leave from an upstairs window.

EPISODE 3, SCENE 15: Maria sees Shawna in a bathroom mirror, and Shawna insinuates that Avery is unfaithful to her and doesn’t love her.

EPISODE 3, SCENE 16: Abby notices the insects inside and surrounding the lab.  The undead Munson bursts through the window but she staves him off with a flare.  Swamp Thing jumps up through the floor and Abby hits Munson in the back with an axe, but this has no effect.  Swampy knocks Munston down and Munson seems afraid. Swampy touches him and asks that Munson be “released”. The insects leave Munson’s body and he dissolves.  Abby asks Swampy if he is Alec, and Swampy recognises her. He is still confused about what happened to him and what he has become, and Abby wants to help him resume his human form.  Abby doesn’t know why the disease is fighting them, but Swampy corrects her and says the disease is “fighting back”.
NOTES: Abby drinks from a bottle of J Buckley whiskey.  As far as I can tell, this is not a real whiskey brand and may refer to Jeff Buckley, the musician who drowned in the Mississippi River.  It seems like an odd reference, but the Mississippi does run through Louisiana, and there are a few notable drownings in the TV series.

EPISODE 3, SCENE 17: Abby returns to the hospital to find that the conditions of the infected patients have deteriorated on account of the antibiotics.  She realises what Swampy’s last words meant and injects Harlan with immunosuppressants, a course of action that Eli does not agree with.  Before security can remove Abby, Harlan’s condition immediately improves. Eli agrees to give the same treatment to the other patients.

EPISODE 3, SCENE 18: Abby visits Susie and talks to her about Alec, and comforts her.

EPISODE 3, SCENE 19: Maria and Avery meet in Shawna’s room.  Avery apologises for his insensitivity. He asks her for some of her family’s money to help Jason finish his research, but she refuses.

EPISODE 3, SCENE 20: At Delroy’s Roadhouse, Abby orders a drink from Liz’s father Delroy and talks with Matt, who congratulates her about the breakthrough at the hospital.  He convinces her to dance with him.  Swamp Thing watches them from outside the bar.

EPISODE 3, SCENE 21: Cassidy returns to the video story to find Xanadu in his house. He tells her that he hasn’t been able to leave Marais and asks her for another tarot reading, even though he is always dealt the same cards  He receives the same cards as always but this time they are reversed, indicating a change. He wonders whether Abby is the person he has been waiting for.

EPISODE 3, SCENE 22: Margaux finds a piece of Alec’s boat and notices bullet holes from a shotgun.  She calls Liz to tell her.

EPISODE 3, SCENE 23: Gordon returns home and is confronted by Avery.  Gordon threatens to reveal what he knows about Avery and the Conclave.  Avery beats Gordon to death with a golf club in his bath. There is a persistent knocking at Gordon’s front door and Avery sees that it is Liz, and she eventually leaves when there is no answer.
NOTES: The Conclave were a villainous organisation that pursued Swamp Thing through several early issues, beginning with Swamp Thing #1 (1972). In the comics, The Conclave were responsible for the explosion that transformed Alec into Swamp Thing, and for the death of Alec’s wife Linda. 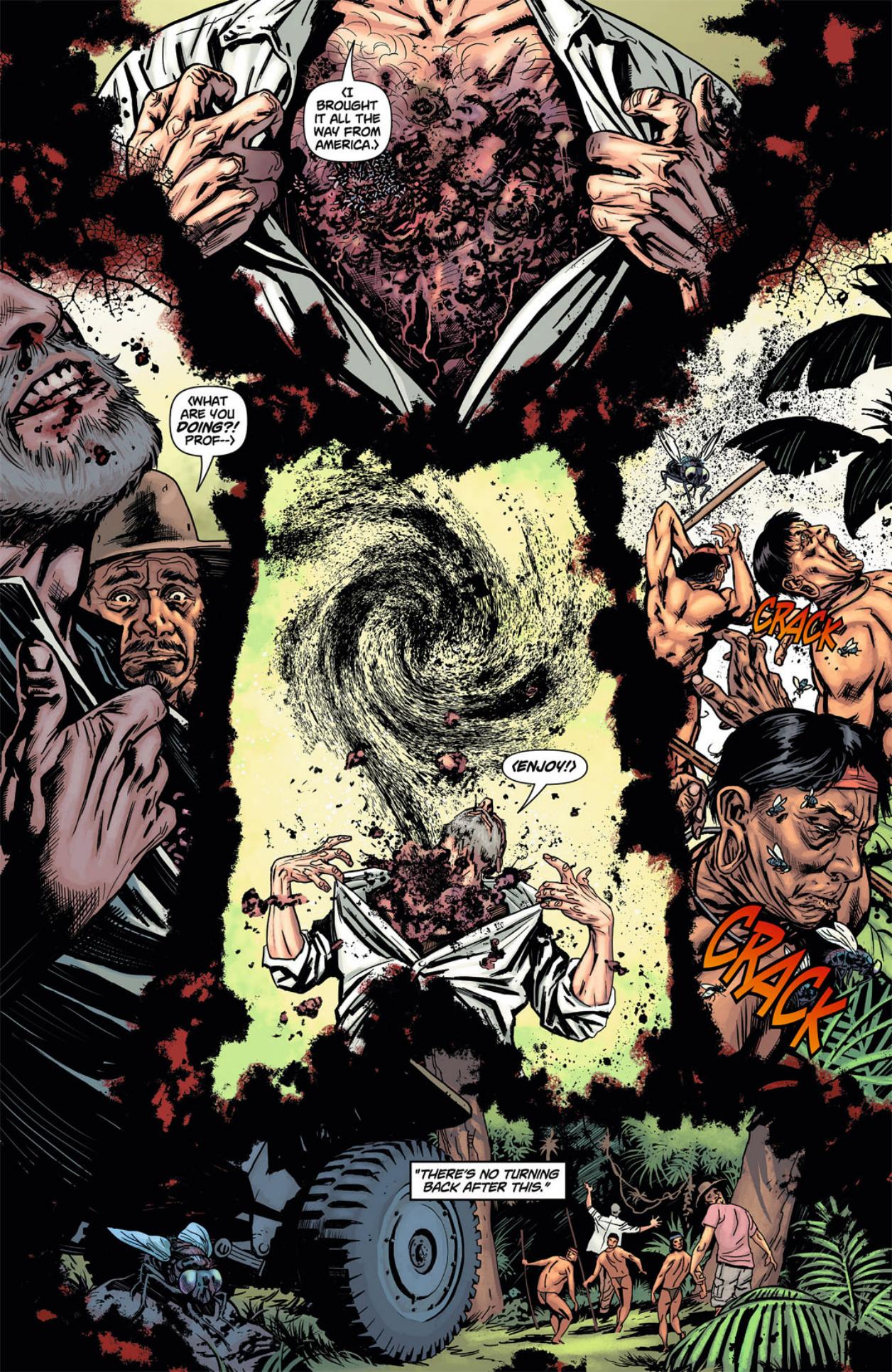